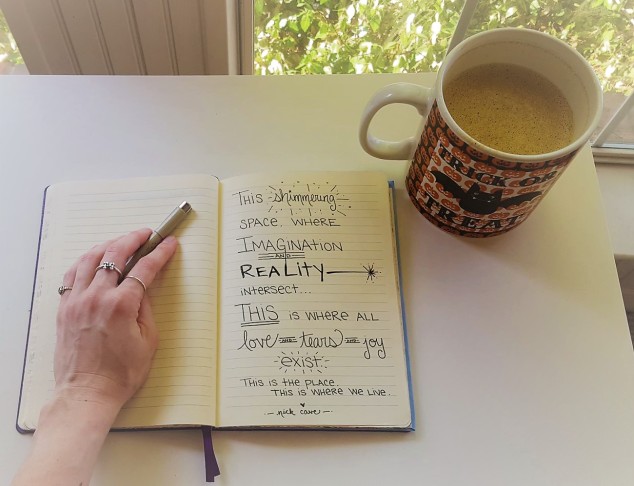 Once upon a time, there was a girl who didn’t realize she was a mere thirty-one days from having her entire world come crashing down all around her, and shattering into a million, tiny pieces. She would have no idea that she’d never be able to put the pieces back together, because they no longer fit, and she’d have to rebuild her world and herself – from scratch.

Spoiler Alert: That girl was me.

Tbh, IDK WTF has been up with me the last two(ish) weeks or so, could be because:
– I’m human
…could be…
– My underlying depression
…could be my…
– My increasing anxiety (shout out to my apparent ride-or-die’s severe inducing of nausea, unrelenting insomnia that perpetuates a constant feeling of exhaustion, aaand all the additional fun that triggers insanely painful tension headaches — free of charge!)
…could be…
– The fact I’ve spent two solid weeks cooped up with a ten-year-old girl whose attitude (and heart) exceeds the size of Texas, all whilst juggling 3-6 projects for my job (depends on the day, really)
…or it could just be the fact I’m… ya know… recovering. Guys, did you know I’m recovering? Because I’m totes recovering. (And I’ve totes got jokes, too.)

Anyway, three IG posts in particular hit me super hard over the last couple of days. There’s the impossibly badass Sarah, the incredibly honest Pete, and there’s the words of an inspirational AF mother of three, Misha, who wrote a short love note to her infant daughter.

Sarah divulged how fucking lonely the journey of sobriety can be, Pete shared his frustrations about relief not being found in the things that once worked, Misha comfortingly and accurately described what it’s like to experience life, stating, “One day you will probably feel small and sad, one day curious and infinite, then whole and shining, and some days a confusing mix of everything.”

So yeah, over the past couple of weeks, my anxiety has definitely made me noticeably irritable, tense, and really unpleasant at times. Like, it’s cool I’ve got the gall and awareness to realize I’m being/feeling this way, but at the same time it feels like it doubles my anxiety because I can see how.. for lack of better terms.. bitchy I’ve been. I like to think I’m more laid back than I probably am (I wear a shit ton of hats, juggle more balls than I probably should, and have an established history of not asking for help when I really need to — because it makes me feel weak, guilty, and ashamed), but I am hoping that by putting this message (blog post) into the world — it will help relinquish some of the *things* I’m feeling. Or maybe it’ll do nothing, who knows?

One thing I do know, however, is that I’m angry, but I don’t know exactly know why. I feel like my skin is too tight and I’m trapped in some fucked up house of mirrors that refuses to allow me to be able find the exit door. I’m not sure how else to articulate it. It’s suffocating and unpleasant and frustrating.

Additionally, I found myself growing increasingly irritated by my heightened awareness of messages screaming at me that I have a “disease” and this is a “life long struggle” and all I wanted to do in return is scream from the bowels of the Internets:

I DO NOT HAVE A DISEASE. WHAT I HAVE IS A SELF-INFLICTED INFLAMMATION // EXTENSION OF A PRE-EXISTING MENTAL ILLNESS, THAT I DID NOT CHOOSE — NOR, DID “IT CHOOSE ME” — I SIMPLY MADE CHOICES THAT EXACERBATED SEVERAL PROBLEMS, BUT IT WAS ULTIMATELY THE FACT, I  PERSONALLY MADE UNFORTUNATE CHOICES IN RESPONSE TO MY LIFE.

(ALBEIT, IT IS ALSO A LIFE THAT IS SATURATED IN MESSAGING AND MARKETING… OMG PINK BUBBLES ARE DREAMY MILLENNIAL #GOALS // ROSE ALL DAY, BITCHES // MOMS CAN’T SURVIVE MOTHERHOOD WITHOUT WINE // YOU GOT OUT OF BED TODAY, HAVE A FUCKING HANDLE OF VODKA!!! FUCK IT, HAVE A HANDFUL OF XANAX WHILE YOU’RE AT IT!!! — IT HAS BEEN A LIFE, SURROUNDED BY AN INCREASINGLY NORMALIZED DRINKING CULTURE THAT LED ME TO CONVINCE MYSELF THAT MY CONSUMPTION COULD BE JUSTIFIED AND RATIONALIZED BECAUSE “LIFE IS HARD… MOTHERHOOD IS HARD… WORKING IS HARD… RELATIONSHIPS ARE HARD… INTIMACY IS HARD… AND CONFIDENCE CAN COME MUCH MORE FREELY — IF YOU JUST ADD BOOZE!)

AND ON A SIDE-NOTE: FUCK ANY AND ALL NOTIONS THAT SAY THIS IS A LIFE-LONG STRUGGLE, BECAUSE THIS TYPE OF BULLSHIT ONLY MAKES IT HARDER AND EONS MORE DISCOURAGING FOR THOSE OF US WHO’VE SURVIVED THE UNDERBELLY OF ADDICTION/SUBSTANCE ABUSE — THIS IS NOT A LIFE-LONG STRUGGLE, IT IS A DAY-TO-DAY *THING* AND IF YOU LOOK ANY FURTHER THAN THAT — IF YOU LOOK ANY FURTHER AHEAD THAN THIS VERY MOMENT — YOU ARE MISSING THE POINT ENTIRELY.

(Aand… if you’d like, I recommend these articles to back up my reasoning about what I do/do not have: Psychology Today, Hip Sobriety, Scientific American — either way, if you disagree with me, that’s fine. YOU are entitled to YOUR opinion about what YOU do/do not have, I’ve just personally become fed up with a culture trying to tell me I have something that I know in my bones I do not have. Plus I love reading and learning, because knowledge is power, motherfuckers.)

There’s (most of) my anger explained. First world problems, I know, but they’re my first world problems and I have a right to vent them if I choose to. I don’t want headpats, sympathy, or any of that bullshit because it’s not going to resolve the problem, I’m just a human explaining my experiences, looking for connection and to open up conversations with those who feel very similarly to the way(s) I do, and hopefully even those who don’t feel the same ways I do. Either way, I’m proud that I straight-up refuse to run from my (239,847,329,084,723) issues, but it ultimately doesn’t really make me feel *that* much better about it all, either.

Last night while combating aforementioned insomnia, I literally sat up in the thick of the night and struggled to find air to breathe. I felt claustrophobic and as though the darkened bay windows in my bedroom were drawing closer to my bed, and the magnitude of my own loneliness hit me. I could feel a pity party creeping in, so I shut that bitch out before she could sneak in, but it didn’t deter from the depth of loneliness I felt.

I suddenly couldn’t remember the last time I did anything social (an after funeral grieving party surrounded by mass consumption of alcohol and rambunctious children that were not my own does not count — if you were there and are reading this, sorry, I tried to “have fun” but it was hard and probably painfully obvious how out of place I felt), I couldn’t remember the last time I had a conversation with somebody that wasn’t my husband, which even still, some days I’m not even sure if he and I have conversations that aren’t about the kids — (this statement is purely cathartic and not meant to be mean-spirited, just stating my observations), and he’s kind of in a different headspace anyway, especially after the passing of his grandmother and how stressful his job is, so I don’t take too much offense to him being “somewhere else” right now — it’s just another flavor of discomfort I’m not responding too very well.

The kind folks at Love What Matters published my story (which was SO FUCKING THERAPEUTIC TO WRITE and felt like so much closure) but in real life, the life that goes on behind the computer screen and social media interaction, it felt anti-climatic. It felt huge in the realms of a commUNITY that means so much to me, but it felt very, very, very lonely in the real world. Which it shouldn’t have, because we’re constantly sharing (myself included) all these self-empowerment “you are enough” “inspirational messages, but for some reason none of that mattered after the weight that was lifted off my shoulders — putting my truth and my story out into the world — and then, just… *nothing* behind my side of the computer screen. I felt proud and happy, yes, but I don’t know… maybe I felt like for that, I did want headpats, gold stars, sparkly balloons, praise, and/or recognition from…. I don’t even fucking know who, because I do not have a circle of “besties” that live near me — I barely have any real-life friends, but it all comes back to me, and this loneliness is ultimately a result/consequence of who/what/where I was this time 699+ days ago.

You see, in reality folks — and to keep things interesting! – I also didn’t want these same (mostly nonixestent) people (family and a VERY small amount of friends I keep in touch with on FB, but haven’t seen face-to-face in nearly a decade) to read my story — because with these particular people, I’d prefer to keep their focus on my recovery and not the devastating amount of mistakes I made and the danger I put myself and others in during active addiction — I don’t know, this sounds like it’s turning into another pity party and that’s not the direction I want to go on in, so I’ll digress and divert to the next section of this post: the human experience and the intensity and idleness it brings.

In the wake of last night’s fit of loneliness, I felt small, stagnant and unsure of what the fuck I’m doing most days. I got angry at the room around me, I somehow and absurdly felt envy towards those who are “fortunate” enough to reinvent themselves, or start from scratch, clean slate, whatever, once they get sober — but then I immediately felt empowered because I was forced to put my world and myself back together under the confines of all the societal roles (and the subconscious ones, too): mom, wife, daughter, sister, colleague… and then my brain must’ve become overwhelmed with an instantaneous, ungodly storm of what-the-fuckery, because I finally fell asleep shortly after.

Something that’s also overwhelming: How much I still find myself in shock at just how many feelings (pure, unadulterated, fervent) we can experience all at once, or not at all.

Okay, if you’ve made this far and/or if it’s not apparent: I’m not sure where I’m going with this anymore, other than the fact I’m humbled, furious, excited, disappointed, confused but explicitly certain that I can not, do not, and will not want to live any other way — because as fucking uncomfortable as life can be — it’s more desirable without the ease of being able to escape like I used to (in the form of bottomless IPA’s and/or conversations with people who made me feel desired, even if it was under false pretenses) — and I’d rather be able to clearly navigate myself through this thing we call life, by taking it one step and/or one day at a time. Some days, I literally have to take it minute by minute and hour by hour, because it’s all I can cling to — and that mentality applies to this very moment. I’m getting by, by taking it minute by minute and maintaining confidence that these feelings will pass, because they always do. I do all this by possessing the wherewithall of knowing that it’s okay to actually sit in all this shit, because it’s from the same discomfort that we learn the most. And it’s when we stop learning that we stop growing, and I’ll be damned if I go back to living my life like that.

“In the space between chaos and shape there was another chance.”

And as per usual, friends, if you’re struggling right now, I see you. I was you. I’m still you (clearly). Keep fighting, it’s worth it. More importantly, you’re worth it. We’ll get through this, together.